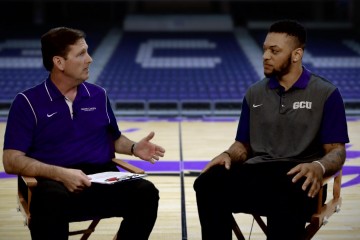 (Cox7 advertiser) The Grand Canyon University Lopes close out the season with a 25-6 record and Coach Dan Majerle and Barry Buetel talk about those final games on the road and the results this year.

Majerle feels good about the 25 conference wins this year. For a third year team to have a 25-6 record is impressive. He credits the coaching staff and the players for their hard work and talents. For Majerle this year was a great stepping stone to where GCU wants to go. The plan is to keep the momentum going for next year.

Not being eligible for tournament play the Lopes set goals for the year. The goals were to win 20 games and win the WAC. They won 25 and fell short of the WAC but they are on their way. Majerle says this is the best team he has coached talent wise and chemistry wise. The guys liked each other they got along on and off the court and they had each other’s backs.

This was a year for senior Grandy Glaze to showcase his talent. According to Majerle Grandy was the player who could get inside and get the job done.

Gerard Martin was a freshman but he did a lot. He started every game except senior night. Gerard was a rock defensively. Majerle recognizes Gerard knows the plays and he is smart. Like Matt, Coach says, those Aussie kids are about the team winning. They play to win and put the team ahead of self. Majerle feels they are two big reasons why the team had such a successful year.

Buetel talks about the road trip and the last three games. The loss to Bakersfield was a game Coach knew would be tough. They play physically and they are strong defensively – a good team. Majerle says the game got away from the Lopes the 2nd half and they suffered the loss.

Moving on to St. Mary’s, a team with one loss at home in the western conference, winning would be a challenge. The Lopes played bad the first half. They stepped it up the 2nd half, played harder and came close, but another loss.

When the team got to Utah Valley they had to stop the two game losing streak. They had to find a way to get the win. It was going to be a hard game. Utah was at home, senior day and a lot of emotion. Josh bounced back with 30 points and Keonta had a double-double. According to Coach, it was not a pretty game but the Lopes got the win on the road.

Barry Buetel talked with power forward Keonta Vernon and wanted to know how he felt about the last game against Utah Valley and his double-double. Vernon’s response was one of humility and he felt it was most important to get the win.

This was Vernon’s first season at GCU and Buetel wanted to know about playing for Coach Majerle, with great teammates the chemistry of the team. Vernon felt it all came from the hard work in the summer. The coaches put the team through a lot of had workouts on and off the court. We grew tougher during the hard times of the summer and we knew we had each other’s backs.

As to coming from the College of Southern Idaho and being coached by Dan Majerle, Vernon said it was “interesting,” The coach at CSI could be intense but he was usually laid back. Coach Majerle is Thunder all the way. The season has been fun and he looks forward to the next two years. As far as his game Vernon says he got more poised in the game and could handle different situations. His jump shots and free throws improved because TJ and Ash were on him, helping him.

Buetel wanted to know if it made any difference in his game if he started or came off the bench. For Vernon either way was ok, he just wanted to help the team win and have an impact. He said a lot depends on his foul trouble. He describes himself as a physical and defensive guy on the court. He does not like to be scored on. He is working on eliminating the dumb fouls and taking those that count.

An early season game against San Diego this year gave Vernon confidence. He knows if he is not in foul trouble and on the floor GCU is usually winning.

With Glaze gone next year Buetel wondered if Vernon would be the only “Smash” left? Vernon said Matt had already been initiated to be the other “Smash Brother”, so it had been taken care of. As far as doing all the rebounding next year Vernon is confident the two big guys coming back next year will be able to help him out. He doesn’t feel he will be boxed out.

Shifting back to GCU Homecoming a few alums shared their thoughts.

Daren Sweet, (92) likes being on campus to see his daughter, now a sophomore at GCU. He appreciates the family friendly campus and visiting with old friends.

Keslie and Nick Halonen (03/04) are glad they don’t have to worry about dinner 15 times a year because GCU hosts alumni tailgating. For Keslie it feels like home to step on campus and see friends and all the changes. It is like throwback Thursday every time they are on campus.

Rex and Ruth Piper (86/89) always feel welcomed and wanted. They are excited about how the community sees and feels about GCU.

Buetel sat down with the new Women’s Soccer Coach Derek Leader. Leader says it has been a quick few weeks but he is excited to be at GCU. The facilities are fantastic and the environment is great. He is enthusiastic for the fall and opening the season in a new stadium. For Leader it has been good getting to know the players. He feels they have good energy about them and he looks forward to coaching.

The style of coaching for Leader and his staff is to analyze the opponent and do self-analysis as well. Look at what the team needs to go after and be aware of from the other team and adjust, correct and improve on their part.

Leader says the style of play is to move the ball quickly, pass a lot and take shots. They will execute a possessive type play. Everybody has a job to do whether it is defense or attacking.

Spring Schedule play has given Coach Leader and his staff a chance to get to know the players. It gives everyone a chance to play but, he says, come fall it will get very competitive.

The spring schedule shows GCU meeting both NAU and U of A in April. For schedule information visit GCU Women’s Soccer

Buetel asks Majerle about the second place finish in the WAC and Majerle is not pleased because he wanted to win it. He feels the loss to Seattle at home is when the Lopes let it get away. They had beaten the two best teams on the road. With the margin in the league so small he says we just can’t give a game away and that’s what happened with Seattle. That being said, when GCU looks at last year compared to this year they took a lot of steps in the right direction.

Next year the Lopes plan to come back strong. GCU is pushing the other teams to get better to beat better teams. Everybody in the league gets better. It is good for the H.S. players to see there are great players in the conference. Recruiting gets better and the conference gets better.

Coach Majerle and the team are looking forward to post-season in the CIT Tournament. They are looking forward to getting out of the 1st round. They have an opportunity to go far if they play well and build on the season. Coach is a little concerned because they have had a week and a few days without a game. It will be hard, but GCU is excited to host the 1st game at home on Monday, March 14 at 7:00.