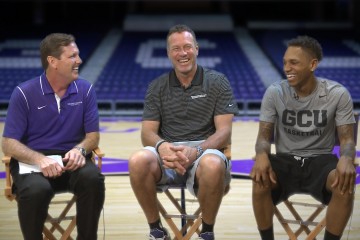 (Cox7 advertiser) Barry Buetel and Coach Dan Majerle sit down to catch up with Grand Canyon University basketball. They talk wins, losses, recruiting, and next year; next year with Dewayne Russell. Don’t forget The Boys of Spring – GCU Baseball is back.

Most recent games were on the road but the home loss against Seattle was a disappointment for Coach Majerle and the players. Majerle notes one of the goals this year is to win the WAC and they just didn’t come out and play like they should have.

On the road against New Mexico State and the Lopes suffered another loss with lackluster play. Moving on to UTRGV on the road against a team that plays tough but GCU got the win. The Lopes came out and fell behind early but came back in the second half and played hard to get the win.

Back home the Lopes hosted Benedictine University in a non-conference game and started slow with a sluggish defense. The Lopes came back in the second half and turned it on late to get the win.

Coach Majerle was looking forward to heading back to the northwest and the Key Arena to play Seattle. Seattle was confident with several conference wins and on home court. The Lopes came out and played hard to get the win in Key Arena against Seattle.

Back home GCU took on UMKC and put out some solid play. The energy was good and there was a lot of support from across the bench that resulted in a win.

Struggling for the first half of the game, the Lopes came out focused after the half and took care of business against Chicago. Majerle said when Ryan and Josh are both on the floor one of them will get open and both players can score. GCU got the win.

Buetel and coach sat down with Dewayne Russell, the “Floor General” to talk about what it means to have the NCAA grant Dewayne another year of eligibility. Buetel says Russell went form a senior to a junior. Majerle says it is huge news to have Russell back. Dwayne says it is great to be playing for a good team and he wants more wins and is excited to play.

With GCU a year away from getting off probation it will be great to have Russell on the floor leading the Lopes for another year. Majerle says Russel knows how we play and practice and what we do at GCU; his leadership will be an asset to the team. Majerle notes Russel is one of the players he can throw out on the floor and count on him to do what he says he will do.

The Lopes will play some exciting teams next year, Duke, Louisville and University of Arizona, to name a few. But for the rest of the games this year, three on the road, the Lopes will take them one at a time.

The sights and sounds of Homecoming were everywhere over the weekend of February 20, at Grand Canyon University. Purple and white as far as the eye could see; food and games, body paint, the Antelope, dancers, cheerleaders, crowns and royalty, alumni and dignitaries.

With the spring like weather and GCU Baseball kicking off their season as the defending WAC champions, Buetel visited with baseball coach Andy Stankiewicz. Coach, staff and players are looking forward to this year’s schedule and play.

GCU baseball took on Gonzaga in a four game series starting on Friday night. They split the series 2-2. Stankiewicz said it was good to be underway and play someone other than themselves. He recognizes the team has some work to do but feels they are on the way to defend the title.

GCU baseball takes on Tennessee Friday February 26, 7 PM at Brazell Stadium. The game promises to be a good one with great weather and a lot of scouts on campus.

View the GCU Baseball Schedule and make plans to take in a game at Brazell Stadium.

GCU Basketball is finishing their third year of four year probation and with tournament play on the horizon recruiting is looking up. Majerle’s feeling is to get recruits on campus. Once they see the campus and the facilities and meet the people at GCU the recruiting is easy.

Of course, it doesn’t hurt that basketball has a 24-4 record this year and are tied for the most wins in the nation. The Lopes are getting recognition nationally and that will draw students to GCU as well.

The final games of the season are all on the road; CSU Bakersfield on February 27, St. Mary’s College of CA on March 1 and Utah Valley University on March 5. Listen to these away games on KXXT 1010 AM.

Post season play in the CIT should see the first game at home and with a win, the second as well.

For information and updates go to http://www.gculopes.com/.