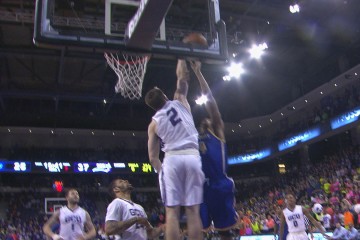 (Cox7 advertiser) GCU vs Missouri-Kansas City men’s basketball highlights. Game played February 18, 2016, at GCU Arena, in Phoenix, AZ. Coach Dan Majerle and the GCU Lopes garnered a victory against Missouri-Kansas City, before a crowd of 6,049 fans, grabbing their 4th win in a row. The final score was GCU 78, Missouri-Kansas City 66. With this win, the Lopes moved to 23-4 on the season and 9-2 in the WAC standings. Grand Canyon guard, Josh Braun, out of Anthem, AZ, was the game’s leading scorer, finishing the night with 26 points and 3 blocks. Braun was also 100% from the line, going 12 for 12. GCU forward, Grandy Glaze scored his 9th double-double of the season, getting 10 points and 15 rebounds. Other point contributors for the Lopes included Keonta Vernon with 12 points, 5 for 5 from the field and Ryan Majerle with 10 points, 2 of 3 from 3-point land. Scoring leaders for UMKC included guard Martez Harrison, who grabbed 18 points, going 5 for 9 from the field and 8 for 10 from the line and Roos guard, LaVell Boyd, who had 13 points and hit 5 of 14 FGs. Catch the entire GCU vs Missouri-Kansas City game, and more action-packed Grand Canyon University Men’s College Basketball, FREE, 24/7 on Cox7.com.